On the 25th October the Final push to eliminate viral hepatitis will take place. EASL together with the ACHIEVE Coalition, organise an event about Viral Hepatitis Elimination at the European Parliament with the members of the EASL Friends of the Liver Group on the occasion of Liver Cancer Awareness month. The discussion will focus on the EU efforts toward Viral Hepatitis Elimination and the tools that the EU could deploy to help meet the 2030 elimination deadline, such as the Europe’s Beating Cancer Plan and the EU4Health funding options.

Follow the link for registration for the Final push to eliminate hepatitis.

View the WHO actionplan to Eliminatie Viral Hepatitis in the WHO European Region, published in 2016. In June 2022, the World Health Assembly approved the implementation of the WHO’s Global Health Sector Strategy Against Viral Hepatitis for 2022-2030, which reaffirms the 2030 elimination goal whilst also highlighting liver cancer as a key driver of hepatitis B and C liver-related mortality. 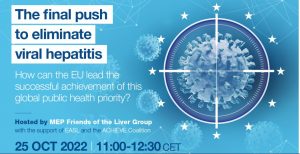